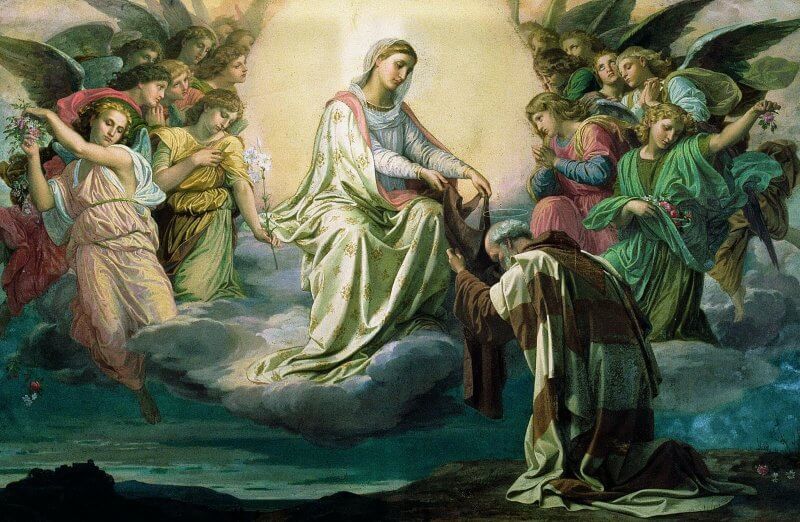 “Whosoever dies in this garment (the Brown Scpular) shall not suffer Eternal fire.  It shall be a sign of salvation, a protection in danger, and a pledge of peace.”

St. Simon Stock was born in the County of Kent, England, about 1165. Although little is known about his early life, legend has it that he was strongly devoted to God from his youth, to the point that he left home at age 12 to live in the forest as a hermit. The name Stock, meaning “tree trunk,” derives from the fact that during his time as a hermit, he was said to have lived in a hollow tree trunk of an oak tree.  Following the customs of the earliest monks, he lived on fruit and water and spent his time in prayer and meditation. After two decades of solitary life in the wilderness, he returned to society to acquire an education in theology and become a priest. Afterwards, he returned to his hermitage until the year 1212.

Around that time, a group of monks from the Holy Land sought formal recognition as a religious order. Their origins were mysterious, and by some accounts extended back to the time before Christ, originating in the ministry of the Biblical Prophet Elijah.  These Carmelite friars had an ascetic, contemplative lifestyle, combined with ardent devotion to the Blessed Virgin Mary. It is she who is said to have appeared to Simon Stock, telling him to leave his hermitage and join the order that would soon be arriving with the return of two English Crusaders.  Impressed by the Carmelites’ rigorous monasticism, Simon joined them that year (1212) and was sent to complete a course of studies at Oxford. Not long after his return to the order, he was appointed its vicar general in 1215. He defended the Carmelites in a dispute over their legitimacy, later resolved by the Popes.

In 1237, Simon took part in a general chapter of the Carmelites in the Holy Land. Facing persecution from Muslims, a majority of the monks there decided to make their home in Europe – including Simon’s native England, where the order would go on to prosper for several centuries. In 1247 he was elected the sixth general of the Carmelites at the first chapter held at Aylesford, England. Notwithstanding his great age, he showed remarkable energy as general and did much for the benefit of the order, so that he is justly regarded as the most celebrated of its generals. During his occupancy of the office, the order became widely spread in southern and western Europe, especially in England; above all, he was able to found houses in the university cities of that era, as in 1248 at Cambridge, in 1253 at Oxford, in 1260 at Paris and Bologna, and he helped to change the Carmelites from a hermit Order to one of mendicant friars.

Simon Stock’s lasting fame came from an apparition he had in Cambridge, England, on July 16, 1251, (the Feast of Our Lady of Mount Carmel) at a time when the Carmelite Order was being oppressed. In it the Virgin Mary appeared to him holding the brown scapular in one hand. Her words were: “Receive, my beloved son, this scapular of thy Order; it is the special sign of my favor, which I have obtained for thee and for thy children of Mount Carmel. He who dies clothed with this habit shall be preserved from eternal fire. It is the badge of salvation, a shield in time of danger, and a pledge of special peace and protection.” The scapular (from the Latin, scapula, meaning “shoulder blade”) consists of two pieces of cloth, one worn on the chest, and the other on the back, which were connected by straps or strings passing over the shoulders. In certain Orders, monks and nuns wear scapulars that reach from the shoulders almost to the ground as outer garments. Lay persons usually wear scapulars underneath their clothing; these consist of two pieces of material only a few inches square. There are elaborate rules governing the wearing of the scapular: although it may be worn by any Catholic, even an infant, the investiture must be done by a priest. And the scapular must be worn in the proper manner; if an individual neglects to wear it for a time, the benefits are forfeited. The Catholic Church has approved eighteen different kinds of scapulars of which the best known is the woolen brown scapular, or the Scapular of Mount Carmel, that the Virgin Mary bestowed on Simon Stock.

On account of this great privilege many distinguished Englishmen, such as King Edward II, Henry, Duke of Lancaster, and many others of the nobility, secretly wore the Carmelite scapular under their clothing and died with it on.  At a later date, probably not until the sixteenth century, instead of the scapular of the order the small scapular was given as a token of the scapular brotherhood. Today the brotherhood regards this as its chief privilege, one it owes to St. Simon Stock, that anyone who dies wearing the scapular is not eternally lost. In this way the chief privilege and entire history of the little Carmelite scapular is connected with the name of St. Simon Stock. That Simon himself was distinguished by special veneration of and love for the Virgin is shown by the antiphonies he wrote, “Flos Carmeli” and “Ave Stella Matutina,” which have been adopted in the breviary of the Calced Carmelites.

In 1254 he was elected Superior-General of his Order at London.   This action was of the greatest importance both for the growth of the institution and for the training of its younger members. Simon was also able to gain at least the temporary approbation of Innocent IV for the altered rule of the order which had been adapted to European conditions. Nevertheless, the order was greatly oppressed, and it was still struggling everywhere to secure admission, either to obtain the consent of the secular clergy, or the toleration of other orders. In these difficulties, the monks prayed to their patroness the Blessed Virgin.  And the Virgin Mary revealed to their prior that they were to apply fearlessly to Pope Innocent, for they would receive from him an effective remedy for these difficulties.”  The prior followed the counsel of the Virgin, and the order received a Bull or letter of protection from Innocent IV against these molestations.

He died at the age of 100 in the Carmelite monastery at Bordeaux, France, on May 16, 1265—the  same day on which his feast is celebrated each year.