Thou art the Christ, the Son of the Living God…”

You are invited to join us in the church every Thursday evening from 7:00 to 8:00 p.m. for this beautiful service.  It begins with Exposition of the Blessed Sacrament and continues with prayers and adoration.  Just before 8:00 p.m., Benediction will begin, closing the service.

This following hymn, “Tantun Ergo,”  is short but sincere in expressing adoration of Our Lord in the Blessed Sacrament. (Following the hymn in Latin is the translation in English.)

“Tantum Ergo” is the only hymn that the Church mandates for use at Benediction of the Blessed Sacrament. It is usually sung at the beginning of the last part of Benediction; after any period of silence, and before the priest blesses the congregation with Our Lord Himself. Even today this hymn is widely known and used frequently. It is one of the most famous chants in existence.

It was written by St. Thomas Aquinas, the Angelic Doctor. He is known as the Common Doctor of the Church. His angelic purity and holiness brought him very close to God. He wrote the hymn “Pange Lingua,” (of which the Tantum Ergo is the last two stanzas) for the feast of Corpus Christi. A fellow priest and close friend attempted this task at the same time. When St. Thomas finished, he shared it with the priest, who was awe-struck at its sublimity and expression. He was so moved by its beauty that he immediately tore up his own work, which he professed was like so much garbage compared to this heavenly-inspired text. 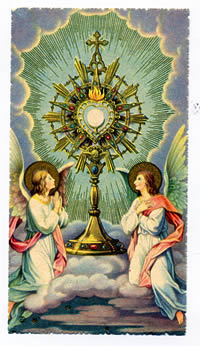 Down in adoration falling,
Lo! the sacred Host we hail,
Lo! oe’r ancient forms departing
Newer rites of grace prevail;
Faith for all defects supplying,
Where the feeble senses fail.

To the everlasting Father,
And the Son Who reigns on high
With the Holy Spirit proceeding
Forth from each eternally,
Be salvation, honor, blessing,
Might and endless majesty.
Amen.