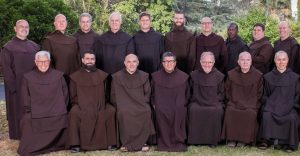 St. Therese Catholic Church is currently staffed by two Discalced Carmelite Friars: the Pastor, Fr. Thomas Koller, OCD, and the Associate Pastor, Fr. David Guzman.  In residence with them at their monastery are: Fr. Albert Bunsic, OCD,  Fr. Bernard Perkins, OCD, Bro. Jason Parrott, OCD, and Fr. Godfrey Chandya, OCD.  Fr. Bernard and Fr. Godfrey assist at the Masses and with Confessions, etc.  Bro. Jason is a full-time teacher at Saint Therese Carmelite School.  You may find the contact information for each of them by going to the CONTACT page of this website.

If you or someone you know may be interested in becoming a Discalced Carmelite Friar, check out a promotional video by clicking here X.

HISTORY OF THE DISCALCED CARMELITE ORDER

The origin of the Discalced Carmelite Order came about near the middle of the twelfth century.  A group of pilgrims settled on Mt. Carmel to lead an eremitical life in imitation of the Prophet Elijah. The main elements of Elijah’s life—solitude, penance, prayer, and contemplation—became the way of life for the first Carmelites.  The Rule of the first Carmelites was given in 1209 by St. Albert, Patriarch of Jerusalem.

After spreading throughout the Holy Land, the Order broadened to Western Europe. However, the European people did not readily accept them.  Because of this, the Order was in a crisis until, in 1247, a prominent English Carmelite, St. Simon Stock, adapted the eremitical life to make it more practical—without changing its essentials. St Simon’s adaptations inaugurated a “golden age” for the Carmelites, giving the Church many mystics, saints, and theologians.  It was also to St. Simon that Our Lady appeared under the title of Our Lady of Mt. Carmel, bestowing to him the Brown Scapular.

A mix of political and social conditions prevailing in Europe in the fourteenth and fifteenth century adversely affected the Order.  Many individual Carmelites and even whole communities succumbed to contemporary attitudes and bore less and less resemblance to the first hermits of Mt. Carmel. But in the sixteenth century a Spanish Carmelite nun, St. Teresa of Jesus (1515-1582), renewed the Carmelite Order and strengthened its commitment to intense prayer.  It was after this renewal that they were then known as the Discalced Carmelites (the word “discalced” translates to barefooted).  In 1562, Teresa founded her first monastery in Avila, Spain, and restored the earlier Carmelite traditions of the “spiritual desert” of silence, solitude, poverty and prayer.  She also worked with St. John of the Cross, a Spanish Carmelite friar who lived in from 1542 to 1591),  to establish a similar renewal among the Carmelite Friars. Both St. Teresa and St. John are now Doctors of the Church due to their eminent teachings on prayer.

St. Teresa’s call to build up the Church fully evolved when the immense project of the missions dawned on her. St. John of the Cross was preparing to join a Carmelite mission in Mexico at the time of his death. Later, Fr. Andrés, Fr. Antonio, and Fr. Antonio were part of that mission. The Vizcaino Expedition gave them the opportunity to spread the Gospel and take the spirit of Carmel to a remote but promising new shore in California.  St. Teresa never dreamed her Carmels would extend beyond Spain.  However, by the time she died in 1582, there were seventeen convents of nuns (all but two of them personally founded by her), and fifteen of friars.  The Discalced Carmelite Order now encompasses the globe!  Following are the four branches of Carmelites in this Province that make up the Carmelite family tree.

FIRST MASS BY A CARMELITE FRIAR IN CALIFORNIA:  On the West Coast of what is now the continental United States, Carmelite friars Fr. Antonio de la Ascension, Fr. Andres, and Fr. Tomas, accompanied explorer Sebastian Vizcaíno as crew chaplains. The three of them offered the first Mass in present-day California on November 12, 1602, at a site at Point Loma in present-day San Diego, and continued up the coast to a site at Monterey Bay, where they celebrated another Mass on December 16, 1602.

The California-Arizona Province of Discalced Carmelite Friars dates from 1912, when friars working in Mexico—originally from Catalonia, Spain—fled to Arizona to escape persecution. At that time they established two parishes in the Diocese of Tucson, Arizona:

In 1964, the Catalonian Carmelite Friars in Arizona affiliated with the Friars in California. The official name is the California-Arizona Province, and it includes Alaska, Arizona, California, Colorado, Hawaii, Idaho, Nevada, New Mexico, Oregon, Washington, Wyoming, and Utah. Within this geographic area, there are also 16 monasteries of Cloistered Discalced Carmelite Nuns, two congregations of active Carmelite Sisters, and 45 communities of Secular Order Discalced Carmelites for lay people.

Due in part to the tremendous popularity of such Carmelite Saints as St. Teresa of Avila, St. John of the Cross, St. Thérése of Lisieux, and St. Edith Stein, the Province is experiencing an unprecedented increase in vocations.

After much prayer and discernment, on November 12, 2002—the exact 400th anniversary of the first recorded Mass on the West Coast of the United States by the Discalced Carmelite Friars (see above)–the Province officially began a new mission in Uganda, Africa (including schools).  It continues to be staffed by Carmelites from this Province and is attracting many new vocations from that area.

The Carmelites in California 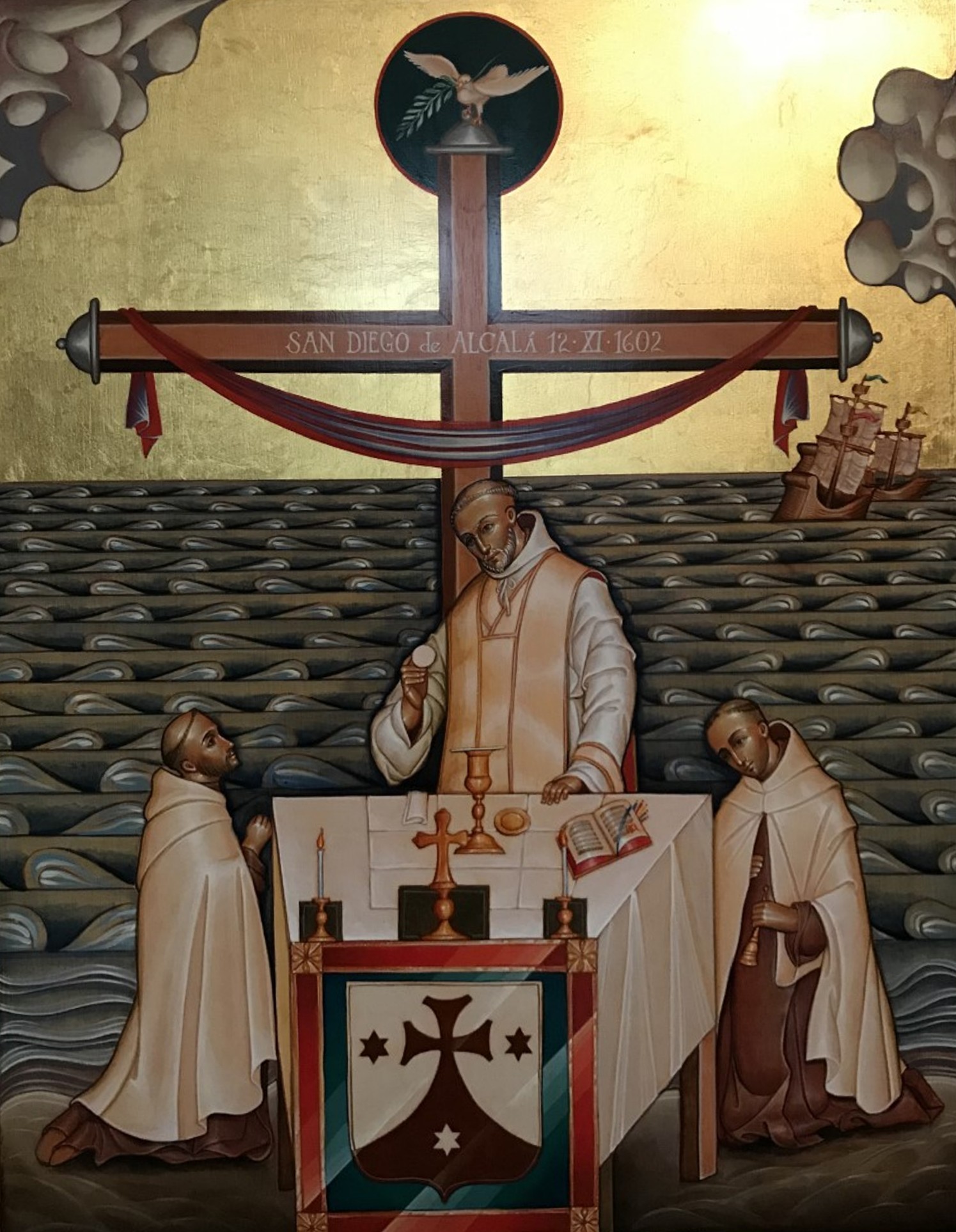 Icon commissioned by the Carmelite Friars from Bro. Claude Lane, OSB, of the First Mass in California

The First Carmelite Friars in the U.S.: In 1602, 167 years before the Franciscans founded the first mission in California, Spanish explorer Sebastian Vizcaino set to navigate and explore the western coast of America,   under  the patronage and protection of Our Lady of Mount Carmel. Accompanying them were three Discalced Carmelite Friars, Fr. Andres, Fr. Antonio, and Fr. Tomas, who served as crew chaplains.

On November 10, 1602, the ships sailed into the harbor of what is now San Diego. Two days later, on what was then the feast of San Diego de Alcala, the three friars celebrated the first recorded Mass in California and named it in honor of San Diego. The Friars then journeyed up the coastline to Oregon, naming many of the coastal towns we know today, including the Catalina Islands, site of the first-recorded Mass celebrated in L.A. County. Later, St. Junipero Serra read the journal of Fr. Antonio, one of the three Friars, and was so inspired that he made a point of celebrating Mass at the very spot where the Carmelite Friars celebrated Mass near Carmel-by-the-Sea, which was named in honor of Our Lady of Mount Carmel.

In 1912, a group of Spanish Carmelite Friars from Catalonia, who had been working in Mexico, fled to Arizona to escape persecution. (Five of these Friars were martyred when they returned to Spain and have since been beatified.) These Carmelites established three parishes in Tucson, one of which, Santa Cruz, the Carmelite Friars still staff today. In 1964, the Catalonian Carmelite Friars in Arizona affiliated with the Friars in California and became the California-Arizona Province, which includes Alaska, Arizona, California, Colorado, Hawaii, Idaho, Nevada, New Mexico, Oregon, Washington, Wyoming, and Utah. The Friars also established the following: El Carmelo Retreat House, Redlands, CA; (1952); Carmelite House of Prayer, Oakville, CA (1955); Carmelite Novitiate, San Jose, CA (1959); St. Cecilia Parish and the Institute of Spirituality, Stanwood, WA (1989); and the Carmelite House of Studies, Mount Angel, OR (1999).

After much prayer and discernment, on November 12, 2002—the exact 400th anniversary of the first recorded Mass on the West Coast of the United States by the Discalced Carmelite Friars, the Province officially began a new mission in Uganda, Africa.

Cloistered Carmelite Nuns: In 1903, five Discalced Carmelite Nuns from the St. Louis, Missouri, monastery came to  Los Angeles to begin the Carmelite life in Southern California (the St. Louis Carmel was established in 1863 with some of the community from Maryland).  The Sisters lived in rented houses in Los Angeles for ten years  until the present monastery could be built in Alhambra in 1913. The area was just beginning to be developed and had originally been an orange grove.

The Nuns live a contemplative, consecrated life of chastity, poverty, and obedience.  The lifestyle of a cloistered Carmelite Nun is almost as it was for St. Teresa of Avila:  prayer, silence, penance, and sacrifice. The day is made up of personal and liturgical prayer, typically beginning at 5:30 a.m. and ending at 10:00 p.m.   Manual labor, an external expression of the life of prayer and an expression of poverty, occupies half of their day.

In accordance with a concept nurtured by St. Teresa herself, each Carmel is limited to 21 members.  At the present, there are 13 professed Sisters who are like a small family, helping one another toward sanctity. Within the California-Arizona Province, there are 15 other monasteries of cloistered Discalced Carmelite Nuns.

The Carmelite Friars of St. Therese Parish: On January 19, 1922, a petition from the Irish Province of the Discalced Carmelite Friars was approved to make a foundation in the United States. Bishop Cantwell, the Bishop of the Diocese of Los Angeles-San Diego, allowed the proposed Carmelite parish to be established in East Alhambra and to be named after Blessed Therese of the Child Jesus, who at that time had not yet been canonized.

The formal opening of St. Therese Parish took place on Christmas Day with the celebration of the first Mass at the cloistered Nuns’ Chapel.   At the same time, the Friars recognized the need of a school. The groundbreaking for the new combination church/school building took place on June 1, 1926, and the church was dedicated that year on November 7. The school was on the ground floor, and the church, on the upper.  The Dominican Sisters were in charge of the School until 1930, until the Archbishop asked them to take another school in Anaheim.  After an   extensive search, the Sisters of St. Mary of the Woods in Indiana (Sisters of Providence) agreed to staff   the   school,   which   they did up until the 1980’s, when it became solely staffed by lay persons.

Our current church was built in 1950 and dedicated on January 14, 1951, by Cardinal McIntyre. In 1954, the priests’ rectory was built, which is now used as office space. The St. Therese Parish Hall and the classrooms for St. Therese School were built in 1963, under the leadership of the then-Pastor, Fr. Gerald Winters, OCD. The St. Therese Parish Center was built in the year 2000, under the leadership of the then-Pastor, Fr. Matthew Williams, OCD. In October of 2012, the Friars moved out of the rectory (the current offices for the Parish) into the former convent on Vega (originally built in 1960 for the Sisters of Providence).

Secular Order of Discalced Carmelites:  The Secular branch of the Carmelite Order is comprised of lay people who practice the evangelical counsels of poverty, chastity and obedience, according to their state in life. In nearly every place where there is a Carmelite Monastery, and even in many places where there are none, men and women have formed Communities of Secular Carmelites–with approximately 70 such communities within the California-Arizona Province alone! The Alhambra Secular Carmelites are divided into two groups, with each group meeting at St. Therese once a month.

NOW THAT YOU KNOW OUR PAST,

COME AND BE PART OF OUR FUTURE!

St. Therese Parish has a very unique School, Saint Therese Carmelite School, which is planting seeds for the Carmelite future in California. COME AND SEE WHAT MAKES US DIFFERENT!